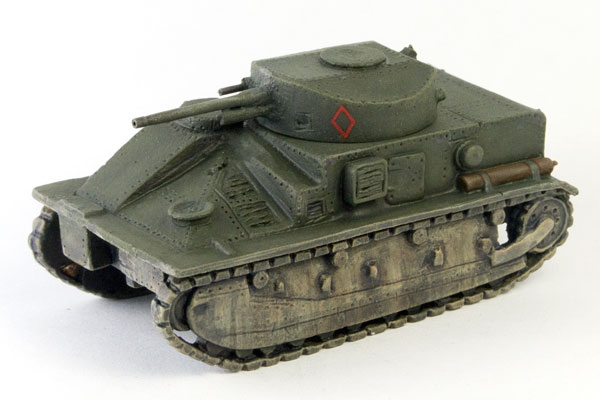 Comments: I've been interested for a while in skirmish gaming the Inter-War period, and to that end I bought myself a troop of three of these Vickers Medium Mk.II tanks from QRF (Ł4.50 each plus about 5 quid postage to New Zealand). Inter-war tank models in 15mm scale (or any other scale really) are very, very thin on the ground.

These come in four white-metal parts each, the hull and turret being hollow. The turret is mounted by means of a long, sturdy peg through a hole in the hull top. In the model shown in the images here I've replaced the soft white-metal 3 pounder gun with a sturdier one turned down from a brass nail.

They're nominally 1:100 scale, for 15mm gaming, but the models are rather too small, measuring out at about 1:115 scale. That makes them too small for 15mm gaming and too large for 12mm. 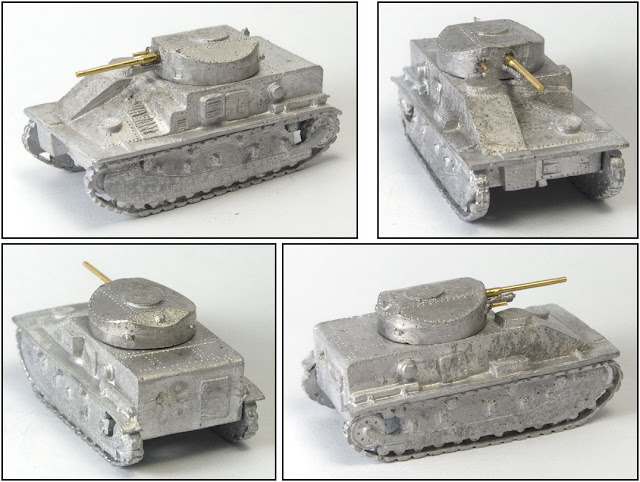 Detail is fairly soft, but acceptable for wargaming purposes. Rivets are represented by indentations rather than standing proud of the surface, which is a pity but does at least give an indication of their presence. The exhaust pipe, which should run along the port-side track guard under the hull access hatch is missing, though the muffler cylinder is shown. All of the models suffer from a "slump" in the hull-top just forward of the turret, where the metal has not properly filled the mold. The gun is modelled with a reciprocator (or something similar) below it; I've seen photos of the Mk.II both with and without this.

A particular disappointment to me is the representation of the turret hatch. The semi-flush split disc shown here wasn't unknown by any means, but much more common was a raised "bishop's mitre" hatch, as seen in the photo above. It's not a difficult thing to scratch-build, but I would have much preferred not to have to.

In summary, the models are acceptable wargaming pieces but the scale issue alone makes them worthless from a scale modelling perspective. They're priced fairly competitively with models of the same scale from other manufacturers, though nobody else (that I know of) makes a Vickers Mk.II in this size.